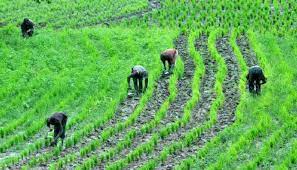 The Central Bank of Nigeria’s efforts to bring up the agricultural output for an insurance of food security to Africa’s highest populated nation has been monopolised by the recent food importation figures. In 2020 the level rose from N1.19 trillion to N1.97 trillion in 2021, amassing a 42 percent increase.

This meant a deficit of N1.46 trillion, according to figures released by the National Bureau of Statistics (NBS).

Agriculture has been the largest economic sector at 25.9% of GDP (Gross Domestic Product) in 2021, at an estimated value of N18.74 trillion, but still doesn’t meet the demand locally so cannot be meeting export needs.

Over November and December 2021, the CBN spent N75.99 billion to help the farming of over 383,000 hectares of maize, rice, and wheat under the Achor Borrowers’ Programme (ABP).

Overall that put the full amount spent to N927.94 billion to over 4.5 million farmers for 21 cultivation projects across the country.

Two larger scale projects were financed by the CBN, where they released N1.76 billion under the Commercial Agriculture Credit Scheme (CACS).